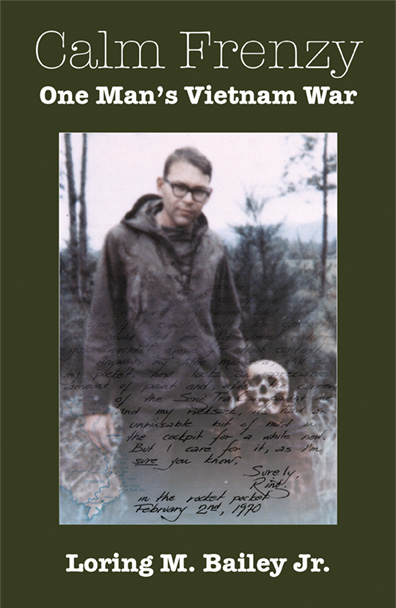 "To be remembered is an honor, and the whole of my object."


Loring M. Bailey Jr. graduated from Trinity College, Hartford Connecticut, in 1967. The recipient of writing awards in fiction, a graphic artist, and an ardent automobile enthusiast, Ring continued with graduate courses in English, and was a technical writer for the Electric Boat Division of General Dynamics Corporation. His love for automobiles was seen through pen and ink sketches, water colors, short stories on racing, a collection of plastic and metal die cast replicas, and an extensive library of volumes on development, history and design.

With a perennial thirst for good writing, Ring was a vigorous reader, and a strong admirer of Ernest Hemingway.

In the spring of 1968, under the threat of the draft, Ring enlisted in the Army with the option for Officers Candidate School. From his induction in June 1968 and Basic training in Fort Knox Kentucky, began a series of letters to his family, fiance, and friends that became his only dependable means of communication. With an Infantry assignment, basic training led to nine weeks of Advanced Infantry Training in the swamps of Fort Polk Louisiana, "Tigerland: The Home of Infantry Training for Viet Nam". While at Polk, arrangements were made through the mail for a Christmas wedding, and on December 23, 1968, Ring was married to Maris Carlson.

Ring continued training with the Officers Candidate School at Fort Belvoir Virginia, where a recurrent knee infection kept him in and out of the base hospital. After six months at Belvoir, he was recycled out of the program and placed on a holdover status, where the final ten months of his Army career was mapped. This included a 39 day leave and nine months of combat infantry in Viet Nam.

In early October 1969, Ring reached the war zone, was assigned to the Americal Division, and was stationed at Landing Zone Liz, a forward fire base that operated out of Chu Lai, RVN. Writing stations were established immediately, and the letters flowed regularly out of the jungle.

In mid-November, Ring was assigned as the commanding officers' radio telephone operator, and shortly after that, promoted from private first class to specialist fourth.

On the fifteenth of March 1970, while on Nui Chap Vung Mountain in the Quang Ngai province, Ring was fatally wounded from the detonation of a hidden anti-personnel device. He was posthumously awarded the Bronze Star Medal and the Purple Heart.

This volume contains edited excerpts of his letters. They were written to his wife, parents and close friends. To his wife and parents he was often over protective, and the horrors of war were veiled and indirect. He wrote of his physical needs and desires, of the equipment he used, and always optimistically about the future. To friends David and Yvette Toohey, he wrote more directly of the overall military actions with histories and fictions that blended reality with the absurd and drew parallels to the home front. To his brother-in-law Rik, his letters shared an interest in good writing and a love for automobiles.

We who assembled this book felt a need to share what Ring wrote to us. The insight of an articulate and energetic soldier shows Viet Nam in the direct perspective of one man in a war with a 360 degree front. We present it to you as it was written to us:

in a calm frenzy. 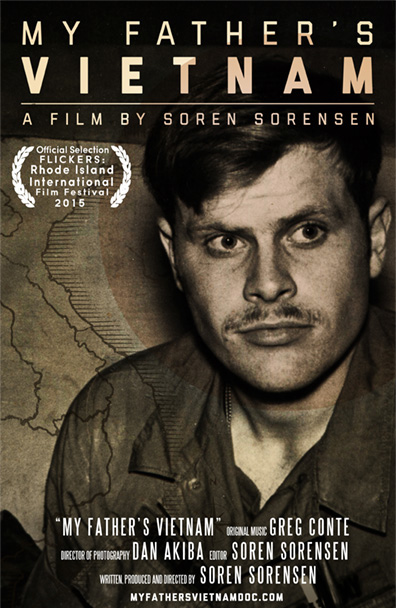 My Father’s Vietnam may seem at first a modest film, a merely personal tale of the filmmaker’s father, a lost friend, and others who knew him. And yet, slowly but surely, it reveals itself as a compact prism of the continuing cultural presence of that chapter of the past we call the Vietnam war. Of course we’re all used to this sort of thing; Vietnam was being documented well before it was even over (Michael Rubbo’s Sad Song of Yellow Skin), and its shadow through dramatic films is perhaps the longest of any war, taking us from Kazan’s The Visitors (1972), Coppola’s Apocalypse Now (1979), Kubrick’s Full Metal Jacket (1987) to Herzog’s Rescue Dawn (2006); it’s become in some ways the quintessential American story. As a result, we have the false impression that it’s all too familiar, perhaps even played out. What, another Vietnam War documentary?

But familiarity can also be a way of forgetting, of papering-over the rough edges of pain and discomfort with layer after layer of representation. It’s the genius of this film that it peels back those layers, one at a time, until at last the armature of lived experience is revealed. Thus its emotional force creeps up gradually, through personal interviews with friends and family, slow snippets of 8mm footage, and montages of some the filmmaker’s father’s journalistic work and war photos. The structure is close enough to convention that, when the last layers begin to fray, we’re caught almost by surprise, and the memories of those interviewed seem, for a moment, almost our own.

The most potent moment of the film, strikingly, comes not from Peter Sorensen but Rik Carlson, Loring Bailey’s brother-in-law whom we first come to know as the long-haired anti-war counterpart to the straight-laced crew-cut kid. He’s a compelling figure for the camera, soft-spoken and direct, for whom the grief of the news of Loring’s death has never faded. His recollection of the day the news was delivered is still vivid, still painful: “You see it in movies, you know, the olive green sedan with the dress uniforms that drives up to the house – and there was the olive green sedan in front of my mother’s house, and my sister was there … and the army men were there … and their shoes were so fuckin’ shiny.” Rik remembers how, “when they were leaving, I said to them, in my anger, I said it’s too bad he was fighting on the wrong side.” It’s a potent moment, and becomes even more so when, near the film’s conclusion, we learn that Rik’s son is now a Marine, of whom he’s enormously proud; in that moment, a new dimension of the man, and the film as well, leaps out of the screen and directly into the audience’s soul.

Ring Bailey, who is both the film’s reason for being and its most elusive subject, remains at that distance given all men killed in combat; his documentary next-of-kin might just as well be the soldiers whose letters are read in Ken Burns’s “Civil War.” But it’s the mark he made on those he loved, and who loved him, that endures, bringing memories and those who carry them back for one more go, one more grasp toward closure of a wound that will never be healed.

All great films about the past, whether dramas or documentaries, are always really about the present, and the future as well. There are things that cannot be undone, the dead who live on only in memory and mementos, in faded Kodachromes and toy cars; there are those who remain, aging as we all must, testifying to how these days shaped their lives, and there are those things that are yet to come, whose potential is yet unknown. It’s not mentioned in the film, which opens and closes with an image of the filmmaker’s ancestor, Soren Peter Sorensen I, in his Danish military uniform, but it’s not a name that will be given again; the son of this Sorensen’s name is Ring.

Russell A. Potter is the author of several books including FINDING FRANKLIN: THE UNTOLD STORY OF A 165-YEAR SEARCH, and a contributor to FILMS ON ICE: CINEMAS OF THE ARCTIC.


Made possible in part through generous support from: